When each perfected 'highest being-body' becomes an independent Individual and acquires its own law of the sacred Triamazikamno, it begins to emanate similarly to the Most Most Holy Sun Absolute, but in miniature. (18)

...indeed, each three-brained being arising on this planet of yours represents in himself, in all respects, as does every three-brained being in our Universe, an exact similarity to the whole Megalocosmos.
The difference between each of them and our Great Megalocosmos is only one of scale.
[...]
And indeed, each of them is the 'image of God'—not of that 'God' they picture with their bob-tailed Reason, but of the real God, as we sometimes call our common Megalocosmos.
Each of them, down to the smallest detail, is exactly similar, though in miniature, to the whole of our Megalocosmos, and in each of them there are all the separate functioning's which actualize in the Megalocosmos the cosmic harmonious Iraniranumange, or 'exchange of substances,' maintaining the existence of everything existing as one whole. (19)

“1. The brain predetermined by Great Nature for the concentration and further actualizing of the first Holy force of the sacred Triamazikamno, called the Holy-Affirming; is localized and found in the head.
“2. The second brain, which transforms and crystallizes the second holy force of the sacred Triamazikamno; namely, the Holy-Denying, is placed in their common presences, also as in us, along the whole at their back in what is called the ‘spinal column’.
“3. But as regards the place of concentration and source for the further manifestation of the third holy force of sacred Triamazikamno, namely, the Holy-Reconciling-the exterior form of this being-brain in the three brained beings there bears no resemblance whatever to ours." (20)

There are several conflicting theories in the teachings of Gurdjieff as to the number of centers and bodies that constitute human nature. The being of humans is variously composed of three, five or seven bodies and brains or centers of function. In many ways these theories are academic and in the course of our work on ourselves we will mainly be concerned with the epistemological and phenomenological aspects of their manifestations.

To avoid confusion I will use the information presented in Beelzebub's Tales as the ultimate authority and only refer to Ouspensky's writing when it confirms the material from Beelzebub's Tales.

Throughout Beelzebub's Tales and in Ouspensky, Gurdjieff refers to man as a three centered or three brained being with a physical body. The three centers are the instinctive, emotional and intellectual. In Beelzebub's Tales, two other potential bodies are postulated : the higher-being-body-Kesdjan and the highest-being-body-soul. Gurdjieff's three centers are similar to the tripartite structure of the human brain. The spinal cord and brain stem control the basic metabolic processes of the body. The mid-brain controls emotion and the neo-cortex controls thought. The three center theory also mirrors the primary triadic structure of the manifestation of the Absolute, giving rise to the analogy that man is made in the image of God.

The final fate of man rests solely with the highest-being-body-soul and its reunion with the Sun Absolute, after acquiring its own Law of Three and Objective Reason. According to Gurdjieff, we are not born with a fully formed Real I, or soul - it is something that must be created or nurtured to a level of development that enables it to survive the deaths of the physical and Kesdjan bodies. The role of the physical and Kesdjan bodies in this process appears to be that of a womb or incubator in which the highest-being-body-soul develops. The Kesdjan body is able to survive the death of the physical body for an unspecified period of time, but it eventually dies also.

Two processes arise and proceed when an harmonious relationship is developed between the three centers. These processes involve the transformation of energies according to the interactions of the Law of Three and Law of Seven which leads to the development of the higher bodies and to the development of Objective Reason. This is the most immediate and practical aspect of the three body formulation. All Work on oneself involves a transformation of energy which proceeds in seven steps, with each step of the process requiring an interaction of three forces according to the Law of Three. Working on oneself is accomplished by performing exercises of Conscious Labor and Intentional Suffering.

Our three centers each require a particular kind of  'being-food' to run on and nourish them. Our physical center requires organic food. Our emotional and intellectual centers operates on 'higher' substances assimilated from the air and from sensory impressions, respectively. The source of organic food is of course from the minerals, plants and animals on the earth. The substances in the air are said to come from the other planets in the solar system. The energies assimilated from impressions are said to come directly from the emanations of the Sun Absolute. When these foods enter our bodies, they are broken down, digested, refined and recombined with other substances according to the Law of Seven, to fuel and maintain the body and its various functions and processes.

Beyond the needs of our physical body and its three centers, the two 'higher' foods also serve the purpose of nourishing our two higher bodies. The Kesdjan body is formed from the substances from the air and the soul is formed from the substances from impressions. Gurdjieff says that these higher foods must be absorbed consciously in order to acquire them in sufficient amounts for our proper development and to that end he taught special exercises and techniques.

Gurdjieff doesn't say exactly what these 'higher' energies are, and notes that scientists of his time had not yet discovered them. One could speculate that the extra-planetary substances from the air are various ionized gasses that are transmitted to earth by the solar wind and captured by the earths magnetic field. This is verified scientific knowledge that was not known during Gurdjieff's lifetime. A Kesdjan body formed of ionized gasses and held together by a coherent electro-magnetic field is an interesting hypothesis to consider. This type of 'ethereal' or astral body would be similar to ball lightening, which is known to be composed of ionized gasses and has been observed to pass through solid walls and windows.

The energy derived from impressions is conveyed by our nerves and is probably related to electrical or electro-magnetic energy and in particular to the information conveyed to our consciousness by means of it. Add to that the ability we must bring to the information in order to apprehend it and make sense of it and the result is understanding. The Law of Three in action. Since the main characteristic of the soul is the acquisition of Objective Reason or the "reason of understanding", the emphasis on information as a being-food is, well, reasonable.

The process of the digestion of the three being foods by three centered beings is described in some detail in Ouspensky's books and also by Gurdjieff in Beelzebub's Tales in chapter 39. Since the transformation of energy involves the Laws of Three and Seven, there are two critical points in each of the three food processes where a mechanical and an intentional shock is required for the transformations proceed to completion. Humans are configured in such a way that there are points of interaction between the three processes where they may mutually assist each other by providing the required shocks. According to Gurdjieff, we need to intentionally apply two conscious shocks. The first has to do with Self Remembering and the second with Intentional Suffering.

The further evolution of the 3 octaves after the Second Conscious shock was not extensively elaborated on by Ouspensky in his writing, but he does relate some interesting quotes from Gurdjieff:

"A new octave then develops within the organism, not outside it. This is the birth of the 'astral body.' You must understand that the 'astral body' is born of the same material, of the same matter, as the physical body, only the process is different. The whole of the physical body, all its cells, are, so to speak, permeated by emanations of the matter si 12. And when they have become sufficiently saturated the matter si 12 begins to crystallize. The crystallization of this matter constitutes the formation of the 'astral body.'

Several followers of the Fourth Way have attempted to elaborate the evolution of the octaves beyond the Second Conscious shock. The results are given in the diagrams below.

From: In Search of the Miraculous, P. D. Ouspensky

From: Willem A. Nyland

From: My End Is My Beginning, H. J. Sharp

From: Perspectives on Beelzebub's Tales, Keith A. Buzzell, Fifth Press, 2017 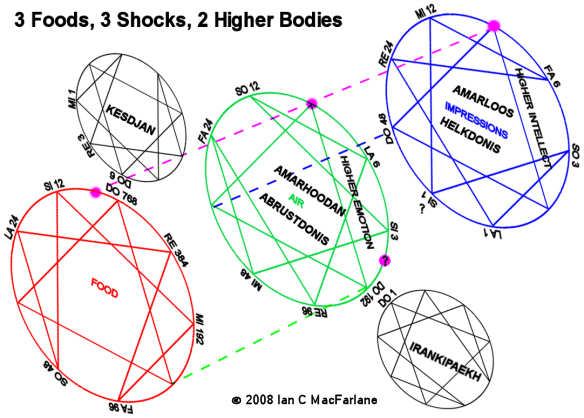