Now when the spirits which were in the meadow had tarried seven days, on the eighth they were obliged to proceed on their journey, and, on the fourth day after, he said that they came to a place where they could see from above a line of light, straight as a column, extending right through the whole heaven and through the earth, in color resembling the rainbow, only brighter and purer; another day's journey brought them to the place, and there, in the midst of the light, they saw the ends of the chains of heaven let down from above: for this light is the belt of heaven, and holds together the circle of the universe, like the under-girders of a trireme. From these ends is extended the spindle of Necessity, on which all the revolutions turn. The shaft and hook of this spindle are made of steel, and the whorl is made partly of steel and also partly of other materials. Now the whorl is in form like the whorl used on earth; and the description of it implied that there is one large hollow whorl which is quite scooped out, and into this is fitted another lesser one, and another, and another, and four others, making eight in all, like vessels which fit into one another; the whorls show their edges on the upper side, and on their lower side all together form one continuous whorl. This is pierced by the spindle, which is driven home through the center of the eighth. The first and outermost whorl has the rim broadest, and the seven inner whorls are narrower, in the following proportions --the sixth is next to the first in size, the fourth next to the sixth; then comes the eighth; the seventh is fifth, the fifth is sixth, the third is seventh, last and eighth comes the second. The largest (of fixed stars) is spangled, and the seventh (or sun) is brightest; the eighth (or moon) colored by the reflected light of the seventh; the second and fifth (Saturn and Mercury) are in color like one another, and yellowier than the preceding; the third (Venus) has the whitest light; the fourth (Mars) is reddish; the sixth (Jupiter) is in whiteness second. Now the whole spindle has the same motion; but, as the whole revolves in one direction, the seven inner circles move slowly in the other, and of these the swiftest is the eighth; next in swiftness are the seventh, sixth, and fifth, which move together; third in swiftness appeared to move according to the law of this reversed motion the fourth; the third appeared fourth and the second fifth. The spindle turns on the knees of Necessity; and on the upper surface of each circle is a siren, who goes round with them, hymning a single tone or note. The eight together form one harmony; and round about, at equal intervals, there is another band, three in number, each sitting upon her throne: these are the Fates, daughters of Necessity, who are clothed in white robes and have chaplets upon their heads, Lachesis and Clotho and Atropos, who accompany with their voices the harmony of the sirens --Lachesis singing of the past, Clotho of the present, Atropos of the future; Clotho from time to time assisting with a touch of her right hand the revolution of the outer circle of the whorl or spindle, and Atropos with her left hand touching and guiding the inner ones, and Lachesis laying hold of either in turn, first with one hand and then with the other. (Plato, The Republic, Book X)

Gurdjieff's cosmology is based on the model of a musical octave and has antecedents in the musical and geometric harmonies and proportions elucidated by the Greek philosopher Pythagoras and his followers, as is shown by the quotation from Plato's Republic given above . He is given credit for discovering that the interval of a diatonic, 7-tone scale is rooted in the ratio 2:1, that of the fifth in 3:2, that of the fourth in 4:3, and that of the whole tone in 9:8. Followers of Pythagoras applied these ratios to lengths of a string on an instrument called a canon, or monochord, and thereby were able to determine mathematically the intonation of an entire musical system. The Pythagoreans saw these ratios as governing forces in the cosmos as well as in sounds. Plato, in the Timaeus describes the soul of the world as structured according to these same musical ratios. Further connections to ancient Egypt and their Ennead of the gods may also be inferred since Pythagoras is said to have studied with the Egyptian priests. 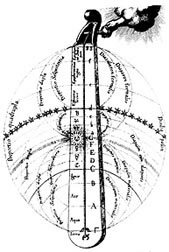 The Hermetic philosophers of the Middle Ages also drew heavily on the Pythagorean Music of the Spheres to formulate their models of the universe. The Divine Comedy written by the poet Dante Alighieri (1265-1321) is an allegorical narrative of the poet's imaginary journey, firstly, through hell and purgatory, guided by Virgil, a symbol of reason and subsequently, through the nine circles of heaven, guided by Beatrice, a symbol of the Mother Goddess. Hildegard von Bingen (1098-1179) described nine Ranks of Angels. Robert Flood, an Elizabethan Alchemist, also depicted the universe as a Divine Monochord.

According to Gurdjieff the Enneagram is a universal symbol by which all processes in the universe can be understood. As the universe unfolds from the Absolute and elaborates itself in the Ray of Creation, its complexity increases over Time as the various gradations of energy interact according to the Laws of Three and Seven. Beginning with the Absolute, the Law of Three manifests in its most simple form as the three fundamental forces in the universe, the Active, Passive and Neutral. At each step or note of the Ray of Creation the Law of Three multiplies and generates more interactions. The sequence of elaboration of laws given by Ouspensky follows a pattern of doubling at every level : 1, 3, 6, 12, 24, 48, 96. Likewise, every note of the octave of the Ray of Creation generates within it octaves of sub-harmonics, leading to the formation of galaxies, suns, planets, sub-atomic particles, atoms, molecules, cells, animals

Since these elaborations all follow the basic, universal pattern outlined by the Enneagram, we see that Gurdjieff  had already outlined in the 1920's what is now called the Theory of Fractals, which is based on the self-similarity of a basic pattern elaborated at many different scales. For example, the branching patterns of trees are similar to the patterns of leaf veins, rivers and blood vessels and air passages in the lungs.

Gurdjieff's unique contribution to the tradition of the Hermetic philosophers was to stress the importance of the discontinuities in the ratios of the notes of the octave. The intervals between mi-fa and si-do only comprise a half tone, while the rest of the intervals are a full tone apart. This is illustrated by the arrangement of a piano keyboard where the missing black keys denote the half tone discontinuities.

Gurdjieff maintains that as the energy and matter of the universe transform up and down the cosmic scale, it requires an extra push or shock when it reaches the shortened intervals in order to continue its transformation. The requirements of these shocks are of critical importance in relation to the higher evolution of humans beings.

The shock at the si-do interval is filled by the Will of the Absolute. The three Laws of the second note of the Ray of Creation are the direct manifestation of His Endlessness and this is called the Theomertmalogos by Gurdjieff in Beelzebub's Tales. This is the Law of Three in its first manifestation and it supplies the first shock and indicates that all shocks require the three forces to be present.

The shock in the cosmic scheme of things that is of particular relevance to humans is the mi-fa shock. The necessary impetus at this shock point is provided by certain emotional or psychic energies generated by the film of organic life that has evolved on the earth. This shock is itself an octave called by Gurdjieff a Lateral Octave. Three of the notes of this Lateral octave are responsible for providing the required shock to the Ray of Creation, since all shocks require the three forces to be present. Humans are particularly proficient providers of these energies, especially when we  generate them consciously. Unfortunately we don't often do that and consequently Great Nature is compelled to extract them by whatever means she can, such as war, famine and natural disasters that cause much strife and suffering amongst humans. The solution to this state of affairs, according to Gurdjieff, is to practice the spiritual disciplines that he calls Conscious Labor and Intentional Suffering which leads not only to the individual self-improvement of humans but also generates as a by product just those energies required by Great Nature for the harmony and maintenance of the cosmic balance. 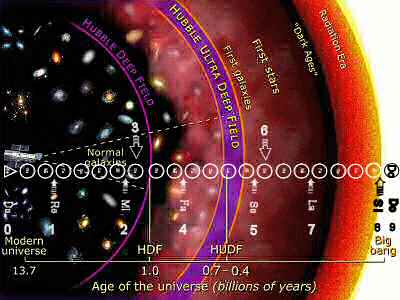