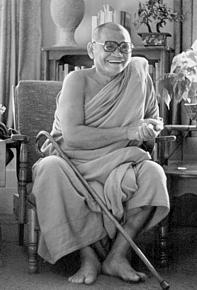 During the late 1960s to  early 1970s, Paul was resident at Wat Pa Pong Buddhist monastery in northern Thailand where Ajahn Chah was the Abbot. Ajahn Chah was a great admirer of Gurdjieff and had studied all his books. Paul became an ordained Buddhist monk under Ajahn Chah's direction.

Ajahn Chah was born in 1918 in a village in the northeastern part of Thailand. He became a novice at a young age and received higher ordination at the age of twenty. He followed the austere Forest Tradition for years, living in forests and begging for alms food as he wandered about on mendicant pilgrimage.
He practiced meditation under a number of masters, among whom was Ajahn Mun, a highly respected and accomplished meditation teacher of the time. Ajahn Mun had an indelible influence on Ajahn Chah, giving his meditation the direction and clarity that it lacked. Ajahn Chah later became an accomplished meditation teacher in his own right, sharing his realization of the Dhamma with those who sought it. The essence of the teaching was rather simple: be mindful, don't hang on to anything, let go and surrender to the way things are.

Ajahn Chah's simple yet profound teaching style had a special appeal to Westerners, and in 1975 he established Wat Pah Nanachat, a special training monastery for the growing number of Westerners who sought to practice with him. In 1979 the first of several branch monasteries in Europe was established in Sussex, England by his senior Western disciples (among them Ajahn Sumedho, who is presently senior incumbent at the Amaravati Buddhist Monastery, England). Today there are ten branch monasteries in Europe, Australia, and New Zealand.

Ajahn Chah passed away in January, 1992 following a long illness.

The Wisdom of Ajahn Chah

The Place of Coolness

A Taste of Freedom

Food for the Heart